June 25, Ft William to Ardrossan, where lessons were learned

This day came in three parts: Time in Fort William, the train ride and the Ardrossan. 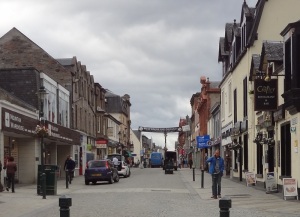 First:Since I had timed things so that I had lots of time, I was able to go down the hill from the hostel and walk around the town and get a breakfast,(where I discovered TV news here can be bad as our TV news) and then back up the hill to the Hostel then a cab to the train station. The town was busy with everyday folks as well as tourists. A lot of people use Ft. William as a base to get out to the country and mountains especially Ben Nevis. 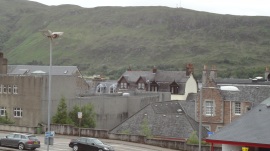 view to the town looking left from the hostel 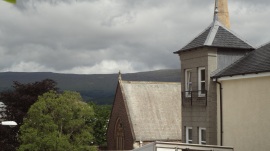 view to the right

At the train station I did what I do when I get to any train station: go up and to the window and introduce myself and tell them where I am so they can find me and help me onto the correct train.   This train station had the best cafe, an old fashioned place with a wide variety of Arty Post Cards. 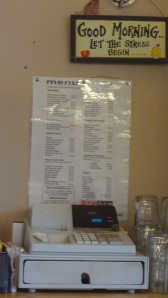 Second: Now I refer you back to the website: http://www.docbrown.info/docspics/scotland/sspage25.htm to see what I saw for about 3 and half hours. (Again, scroll down to Fort William and go upwards) Either way it was quite stupendous. Great swaths with no sign of human life what so ever. Even when I thought I saw sheep , turns out they were white rocks. 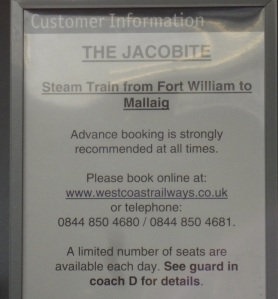 I changed trains at Dalmuir so I would not need to get from Queens Station to Glasgow Central which are a few blocks from each other and terribly inconvenient. So when I identified myself to the man at the ticket office at Dalmuir) he told me he had no one there to help me. (Turns out there was. I found out at Ardrossan from the guy who met me there.) So I was left on my own to get on the train. Something I have anxiety about due to my luggage, the short stop and how big a step and or gap there can be.) Of course other passengers helped me.

Three: So I from what looked like a quaint little area when I got off the train I had my cab ride to the Couch Surfer person in Ardrossan. Right away this lady seemed odd and off putting, but here I want to think of what I need to say as this story proceeds, as this woman haunted me for a bit through the trip. In fact, a few days ago, I had a dream that I had to return there to get my siutcases. Which since I’m writing this sort of came true. That said, if this annoying woman was the only trouble I had with all of the strangers I met, some I now consider dear friends, then I would be incredibly lucky. And I am incredibly lucky. 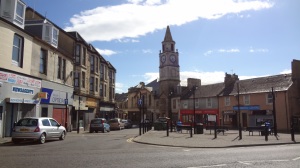 Where I got off of the train at Saltcoats, and got a taxi. Sorry i didn’t get a chance to look at this part.

Mainly she was nuts, in a self absorbed,thoughtless and stupid kind of way: on the phone all of the time talking about how involved and active with couchsurfing she was.

As I had no dinner with me, hosts aren’t obliged to offer meals, and more importantly, she had no wifi,  – I had not realized how important that would be as at most stops I had to make train connections to the next stations and contact my next hosts and try to write my blog – we can see how that worked and do any banking, etc. She directed me to the ASDA (a big store I had not heard of before)  “Just down the hill”, like they all say. And it was down hill. 1.2 miles. ( If I mentioned that I was disabled – the cane might be a clue there – and really tired once I said it ten times.) I hadn’t thought to ask about a bus nor had she thought to mention it. My not thinking when I’m what I call now travel tired was one of the lessons.

The walk was mostly straight down a street with older row houses like Pittsburgh’s uptown but pastels like the housing where I was staying. And no trees. Of course I enjoyed being in the library, and finding a dinner to nuke, I found a bus to take back up the hill but I couldn’t remember the address where I was I got off early and wandered around an area where all the houses look alike sort of what we would call tract housing. On the way down I saw at least three folks usually with friends being totally “off their tits”. Never saw so many in such a brief space of time on a sunny Monday dinnertime. But on the way back as I was wandering around trying to make my way I had the most delightful interactions with some very sweet girls, running up to me and any one else to show them their tiny pet in a box. It was a bee. 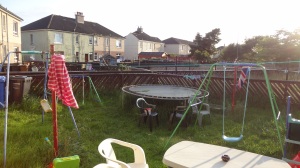 You can see what houses look like from the back. i was surprised at how few trees there were. The older buildings, towards the water were these colors also.

So I’m back and eating and this lady starts to really annoy me. Telling what routes and times I should get to the Ferry.(I had a planand lots of time to get there the next day. This lady thought I should spend it in Ardrossan.). I restrained myself from saying I want to get as far away from you as fast as possble. Instead I said I had already made these arrangements with the train people who meet me and help me. She said “who cares about them  – they’re a company” Now she’s talking about a lot of always friendly and gracious people who have made this trip by train even doable for me. One of the things that makes UK a magical place. She also kept telling me how she was going to be going to Belfast for a big Party on the 12th  – “They have Bonfires and everything” – I’m glad that I didn’t know how crazy that was at the time.

So I try to go to bed

It bothered me how trusting she was with her daughter and strangers – including actually wanting her to sleep with the other couchsurfer sleeping on the top bunk, a  young woman on her way to Glasto. I was reassured by her as she seemed quite sane and had stayed with this woman before. (I was on the bottom bunk.) Actually what I was most concerned about as this woman seemed stranger and controlling was that she could accuse me of something inappropriate with the little girl. The little girl had no bed time and would climb up and down the ladder to the top bunk repeatedly after I had gone to bed. The hostess was waiting up for a family who was going to stay in her room through Air BNB. That was her funds for the two of them to go to Belfast for the 12th

Needless to say I didn’t sleep well but I didn’t care as the next day meant I would not be around this crazy lady, Whom no one else seemed bothered by except for the little girl.