Interuption from past and future 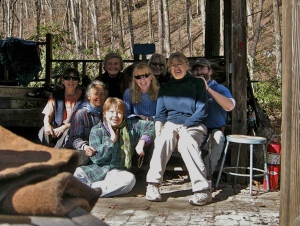 the group of us at Touchstone doing an independent woodfiring.

I want to take a break right here brought on by talking about feeling at home with the potters.

One is that is a big part of my identity even though I’m far from accomplished. I consider my work so far quite embryonic. And in fact one of my hopes for this trip is to have some kind of clay breakthrough.Working in clay keeps me sane when I have a real job and is the closest I get to meditating. And I have made some very good friends through the process.

Marlene and I glazing – something we both hate. We also both hand-build. Those perfectly round orbs at the bottom are hers – pinched.

Which brings me to the second thing –  One of those friends – Marlene Boyle  – passed away towards the end of my trip. You can see her in these  pictures another friend, Tracy, took of a group wood fire we had rearranged at Touchstone  – A crafts camp south of Pittsburgh – near Frank Lloyd Wright’s  Falling Water in fact. This points out one of the aspects of writing this log well after the actual events. (Another one being that I can’t remember things I was sure I would have).

my and my body of work in the glaze room.

And the third is – since I’m showing these photos I thought – as a process person I would take this opportunity to show folks unfamiliar what a wood fire involves. And a little of what where I’m from looks like.- The country part.

These are from 09, not a great time for me as I’m struggling with learning how to participate in this physically demanding process with my MS, (even with being given a huge amount of slack). And my work was even more anemic than usual due to the MS – not so much my hands themselves but having taken such a break from using my hands in clay in terms of trying to deal with the other parts of MS. When the times came that I could work, my hands were all rusty and I had to refigure how to move the clay through it’s stages while figuring out how to work me through my stages.

That’s Tracey on the left which for some reason when I publish this it won’t hold her caption.

the creek on the other side of the wood pile. This is November those rhododendron are native not invasive like they are in UK. 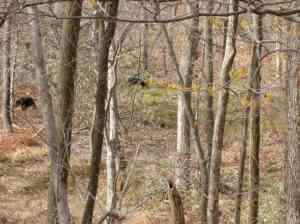 Wild life: worm on my bowel 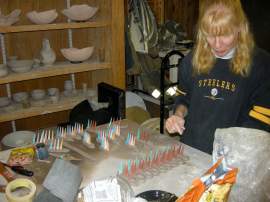 Jill and her perfect cone packs. These are placed at spots in each chamber to gauge the temperature. The different colors fall when a certain amount of heat is absorbed.

Me wadding my pieces. Wadding is like a mixture like home made play dough that you stick on the bottom of your pieces so that they don’t become permanently attached to the shelves. Not a fun part to do.

Loading – Joe was the finder – the ware is arranged by shelf height but I would call for certain shapes and sizes to fill it. The idea is to think how the fire would be guided through the kiln and hit the work.

Loading the salt chamber, looking towards where Falling Water is. 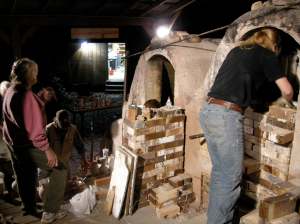 Jill’s already bricking the door. Numbered bricks are so pretty when it comes to that arch.

Finishing touches. putting the last pieces on the bagwall.

cleaning up the dust after the door is bricked and mudded and papered. 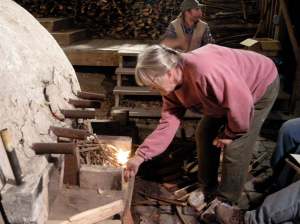 Let the festivities begin!
A little tiny fire in front of the intake ports.

This is candling. It heats up the chambers and deposits ash on the pieces. It goes on for hours and hours and is my favorite part of the firing process. ‘Cause its easy. 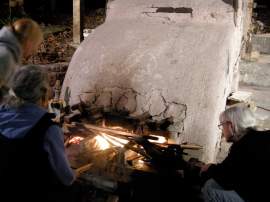 The fire’s moved into the kiln

Cook until Done:
Jill, Marlene and Valda, the Hardest working women in Wood firing. This part goes on for days bringing the fire from the front into the back chamber, timing the stokes by the fire coming from the blow holes.

One week later:The end result which was not great. The pieces in the lower left hand show what happens when the required temperature isn’t reached.

What happens when a piece falls off of the bag wall into the fire.

Me, Marlene and Valda Final checks

Deconstructing: That shelf Valda has isn’t light, and Marlene has a chisel to scrape off the wadding and clay peices that stuck. Least fun part of this process.

Marlene peeks out over the large pile of ash we did not remove before all of this – Let that be a lesson to all wood fire folk. 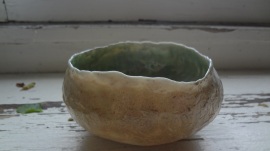 My worm bowl after firing. The warpage that happened in the kiln in my mind works on this piece but really it’s a sign of poor technique.