A few notable people and events at the Convergence

Lucy complemented my Urban Eco Steward Shirt so she won my extra one. And she kindly mentioned it in her report on the convergence.

Danny- like many people here remind me of someone else either in appearance manner or just the vibe. Well Danny reminded me of someone in all these ways – I couldn’t place who  – until he was the one to MC our  Saturday ceilidh and Auction some items – oh of course John Wray. One of John’s many responsibilities at Waverly  – (my church back in Pittsburgh) is to be the MC and auctioneer at our annual fundraiser. Their style is oddly similar. Also it turns out Danny is Friends with Jake Black of Alabama 3. ( See June 8) and says they have done fundraisers for Permaculture Scotland. Small world. 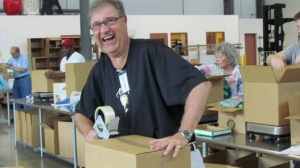 John Wray : I don’t want to know what he is so happy about boxing up

The ceilidh was fun but the most exciting part for me was our little singing class got up and did two of our songs- several were as taken aback as I was at the turn of events but the truth is if you couldn’t sing in front of these kind folks then you couldn’t get up in front of anyone. I was very nervous but it was fun. 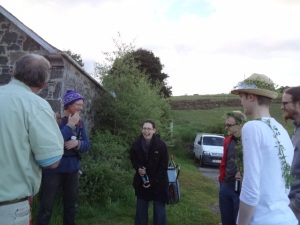 me singing with people in front of other people

There are two other folks I want to mention. Abigail and John – I had the best time talking with them at the fire after the dancing after the singing. I mostly remember getting a lesson on North and South – it’s an issue here. but we laughed a lot. I am very sorry that I don’t have a photo of Abigail whom I had several very good conversations with and I really enjoyed her company. Now John I mostly talked to Saturday and he was a trip in that had I had a child at 16 I would have thought he could be him. Or if we worked together we would need to be separated because we would have encouraged each other with our bad attitudes. We both have an in ability to keep our mouths shut in a politic way. Plus he had a wonderful story involving him getting a tire to stand on and a broom stick to be ready to save the very overly imbibed electrician he happened upon while improving a squat.

After the stories and everyone had drifted to bed a piper played a lullaby for us. 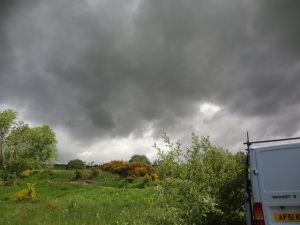 this was the next day but its what lullaby sounded like.